Galaxy S(uperphone) III - How I fixed a flawed phone

I upgraded my aging T-Mobile G2 (HTC Desire Z) in November, and boy what a difference 2 years makes.

The Samsung Galaxy S III (SGH-T999) is leaps and bounds better than my old phones. It isn’t just the pretty hardware and speedy internals, Google’s latest OS update, Ice Cream Sandwich (Android 4.0) is a HUGE improvement and eliminates almost every complaint someone could throw at Android. The Galaxy S3, as of this writing, is the best Android phone to get, and it is available everywhere, on any carrier. Despite my praises however there are some things that hold it back, and Samsung is to blame, not Google or Android.

I’ve rooted and installed CyanogenMod on each of my previous phones, including the original Android phone, the T-Mobile G1. Both of my previous phones came with stock or close to stock Android straight from Google. I flashed CyanogenMod (CM6 on my G1, CM7 on my G2) mostly due to lack of official updates from Google, both the G1/G2 were left behind due to hardware limitations. CyanogenMod breathed life into my aging devices and allowed me to prevent spending money on newer hardware for that much longer. 2 years is a long time to wait in the mobile world, especially when newer and much better devices were being released every few months in the early days of Android.

When I bought the phone I decided to leave it alone and give Samsung’s stock experience in tact. Their custom interface, which runs more than skin deep, is called TouchWiz. TouchWiz does a few things for Samsung, it makes their devices “look” like Samsung, this is good for them, since this skin is consistent starting with their Galaxy S line of phones. TouchWiz also adds some nifty features (notification toggles, gestures, camera) that make it compelling to people that are new to Android, they also add some features that Google doesn’t provide natively in Android. However they also break a few things and ruin the Android experience with their proprietary sharing implementation, their confusing USB Mass Storage options, and other little things that, admittedly, many people don’t notice or care about.

I lived with a completely stock, out of the box Samsung TouchWiz (Android 4.0.4) experience for about 3 days before getting frustrated with Samsung’s “helpful” additions to Android. After rooting and installing CyanogenMod (CM10, based off of Android 4.1), which also upgraded my phone to the (at the time) latest version of Android Jelly Bean, which wasn’t officially available for any phone other than Google’s own Galaxy Nexus and their Nexus 7 tablet. Once I had installed CM10, life was good, the phone performed beautifully, Samsung’s hideous UI was gone, and I was able to use Android as Google intended. I did lose a few things though, it has been 2 months and I haven’t missed them. When you install stock Android, you lose all/most of the custom stuff that Samsung has installed including some of their proprietary (albeit nifty) sharing features, WiFi direct doesn’t work natively, Smart Stay (their eye-tracking feature) goes away, and a few other bullet points on Samsung’s checklist for why their phone is better than every other phone on the market. 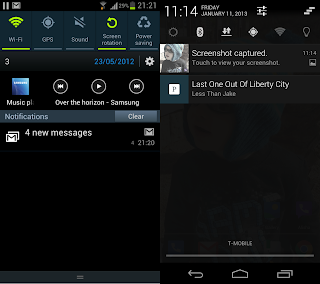 Some of the noticeable differences are the Notification Toggles, which are completely customizable, and don’t take up half the screen like Samsung’s implementation. The blocky, candy-colored theme of Samsung has been replaced with Google’s much more subtle and clean look. 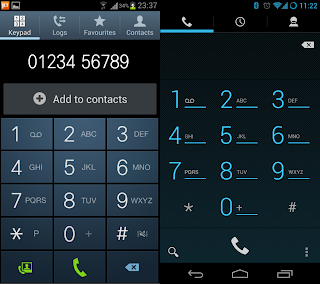 After a few days, I discovered a hack (links on bottom of post) that would allow me to remove my biggest complaint against the Galaxy S3 and pretty much every Android phone that has been released since the Galaxy Nexus introduced on-screen buttons. Hardware buttons need to die. I’m all for a power button, volume rocker and a dedicated camera button, but we don’t need them on the face of the device. Once Google decided that the menu button needed to go away in Android 3.0 (Honeycomb), there is no need to have a physical key dedicated to its use! I absolutely hate the single hardware button flanked with 2 capacitive keys on Samsung’s latest phone (and the Galaxy Note series), this used to be exclusive to the International version, but this time around Samsung was able to strong-arm the carriers domestically and each GS3 in the US has the same layout. The hack allows me to display on-screen buttons, and disable the hardware keys completely, or in my case, turn the home button into the missing dedicated camera button. This is great, in that it allows me to prevent accidental taps of the back/menu buttons, and I don’t need to have their backlights draining my battery, since they no longer light up as the sensors are no longer in use.

After all of this, which only took a few hours, I now have the most awesome phone on the market. I took my, pretty awesome, Galaxy S3 and turned it into the device that Google could have introduced, granted the device is already 6-months into its life and we’ll probably see a refresh, presumably the Galaxy S4, announced in March. I’m completely content and happy with what I have, and can’t wait to update to CM10.1 (based on Android 4.2), once it reaches semi-stable, monthly snapshot status (within a few weeks), I’m not hardcore enough to flash nightly builds onto my phone.

DISCLAIMER: I take no responsibility for broken, bricked, damaged, dead, eviscerated, warranty voided devices. Proceed with caution, and remember to READ EVERYTHING before getting started. Happy modding!