I’ve done a few of these lists before, and it is interesting to see how my tastes and usages have changed depending on the device, and how some apps persist. Check out my previous lists: My Top Apps for 2010 (T-Mobile G2 running Android 2.3.x [Gingerbread]) and Android Apps - What I Use (T-Mobile G1 running Android 1.6 [Donut]) or dive right into the (mostly) new apps below, in no particular order. 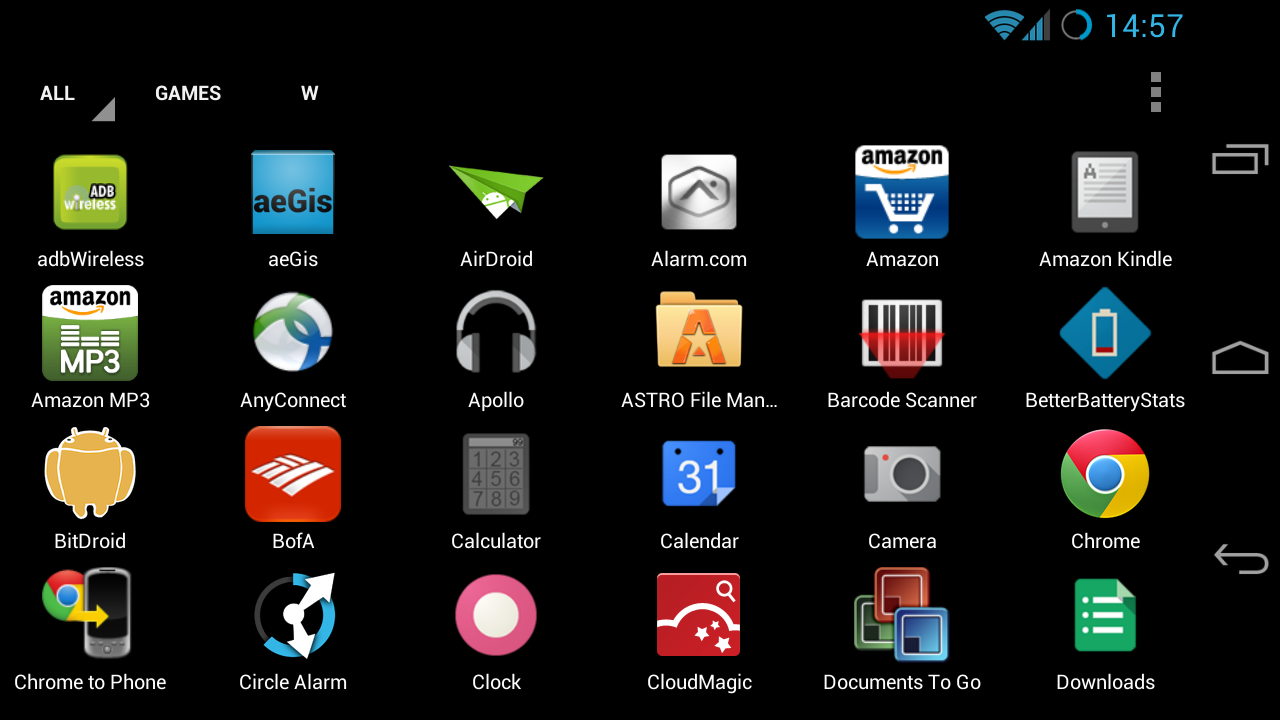 Note: I have been using a Samsung Galaxy SIII (on T-Mobile) running CyanogenMod 10, so your mileage may vary and some apps may not be compatible without rooting and/or installing a custom ROM. I’m also using a Nexus 7 tablet, I use most apps on both, but will indicate where differences occur.

Nova Launcher - Complete home screen replacement and loads of customization options. If you want a fast way to cover up some of the crap that Samsung/HTC/Motorola put in your device, this can help. It allows you to set the number of icons as well as number of home screens, options for folders, and custom icon themes. It also supports gestures, which let’s me get rid of a few icons in favor of a swipe or double-tap on the home screen. 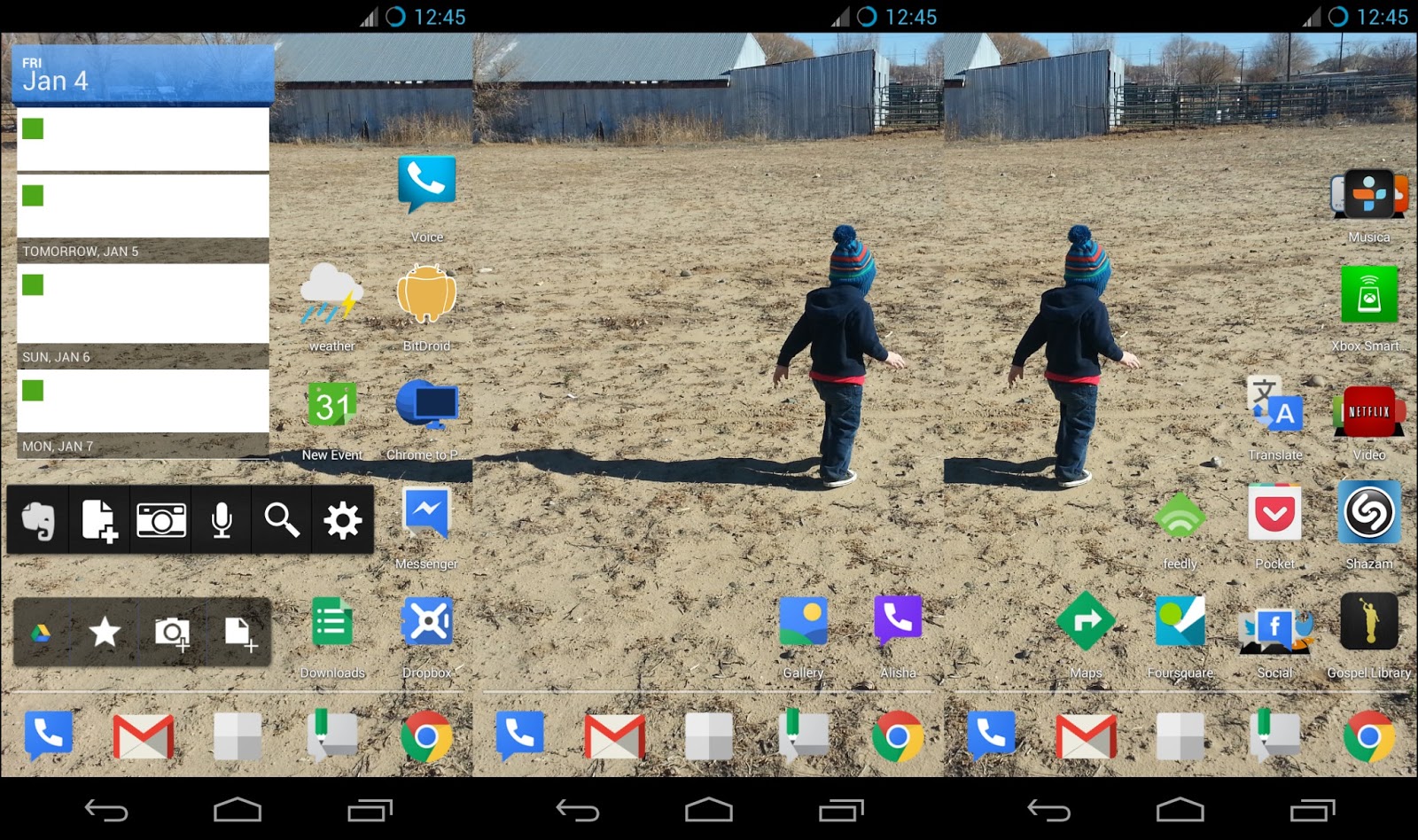 Chrome for Android - Finally I have a device that supports Chrome for Android, it is almost everything I thought it would be. It is super fast, syncs up with my other Chrome instances (installed on basically every device I own), my bookmarks are there, automated sign on for google services. It is great, if you are running Android 4.0 or higher, you should ditch the “Browser” app and install Chrome now. My only complaint is no option for Full-Screen, location bar is always visible, though this feature is apparently in the works.

Simple - Super fast Foursquare check-ins. If you follow me at all you will know that I’m a self-proclaimed Foursquare junkie. I check-in everywhere and reap the benefits of awesome recommendations whenever I’m looking for something new, or something nearby. This app takes the slow out of checking in, once you have authenticated the app (a one-time process), launch the app, you see a map and a list of nearby venues (up to 20, I think), tap an item and boom, you’ve been checked in. There is a search feature as well, if the venue isn’t listed.

The voice commands are also very useful for things while you are driving, such as “text Alisha on my way home from work”, that pops up a confirmation dialog, you hit send, done, or “call Mom” Android has been doing this for years. What is new however, is the ability of Google Now to surface information when you need it. What? How does it know? Basically Google has access to all of your Google stuff, so it can scan your email/calendar/etc to display useful info such as event reminders, package shipping confirmation, information about your stock portfolio. Google uses your phone’s GPS location to determine, and notify you, when you need to leave for an appointment, including delays such as traffic. This is my favorite feature personally.

Google Now also learns what you do, for example, it regularly tells me how long it’ll take to get to/from work in the morning before I leave for work and in the afternoon before I leave from work. It knows that I usually leave work for/from at certain times and that I like to watch movies on the weekends. I have trained it (unintentionally, I might add) I search for movie showtimes on Friday/Saturdays and Google (Now) knows that. There are many other awesome things that it can do and that Google will continue to add to. This is THE reason to get the 4.1 Jelly Bean update (or new phone), which is currently the only way to get Google Now.

Rapido - Not to plug my own application, but I really do use it all the time, which is one of the reasons I built it. I WANT to use it. In a nutshell it allows me to post quickly to both Facebook and Twitter, fast.

SwiftKey - One of the biggest things that sets Android above the other phone OSs out there are the custom keyboards. Android has a plethora of virtual keyboards to choose from. The stock keyboards are pretty good, and get better with each version. As of late Swype has become the de facto keyboard for many an Android device. I decided to give SwiftKey a try after using the stock Jelly Bean keyboard, simply because it was an option, I didn’t hate the JB keyboard, but now I LOVE SwiftKey.

I’ve been testing SwiftKey Flow Beta 4.x which adds in the ability to do swipe typing, yes, just like Swype, however it does it with the amazing predictive power of SwiftKey, which is its main selling point. I can hammer out messages and text in no time, and it is very good at deciphering and writing what I want. You can also give it access to your text messages, Facebook and Twitter, so that it can learn how you type and better help predict. It really is awesome and has changed they way I type for the better. In fact I wrote the last half of this post using SwiftKey.

TuneIn Radio - I’ve been late to the party here. A local station I’ve come to enjoy only comes in clearly when I’m downtown, as a result the broadcast is usually fuzzy, not so with this app, so long as you have Internet, it is crystal clear.

Feedly - Great for reading my RSS feeds, it syncs up with Google Reader so I don’t have to maintain multiple lists.

Re:Me (phone only) - This is best described as a reminder service. When you receive a new SMS, it will notify you that you have not responded, even if you have already read the message. This is useful for me since, I often read a message and then get distracted or something, this reminds me to respond. You can of course dismiss reminders and ignore numbers if you don’t care to be reminded.

aeGis (phone only) - This is the missing administrative tool for Android. The service operates on SMS triggers in order to locate, lock or erase your device. Updates have been coming very frequently, I’ve tested the app, but haven’t needed to use it, luckily.

on{X} - I’ve written about this before, it is a great automation tool, that let’s you take care of menial tasks without thought.

These are just the more common apps that I use, there are many many more installed on both my phone and tablet. I keep discovering new ones daily, and this doesn’t even cover the games. What are some apps that you have found useful or interesting?